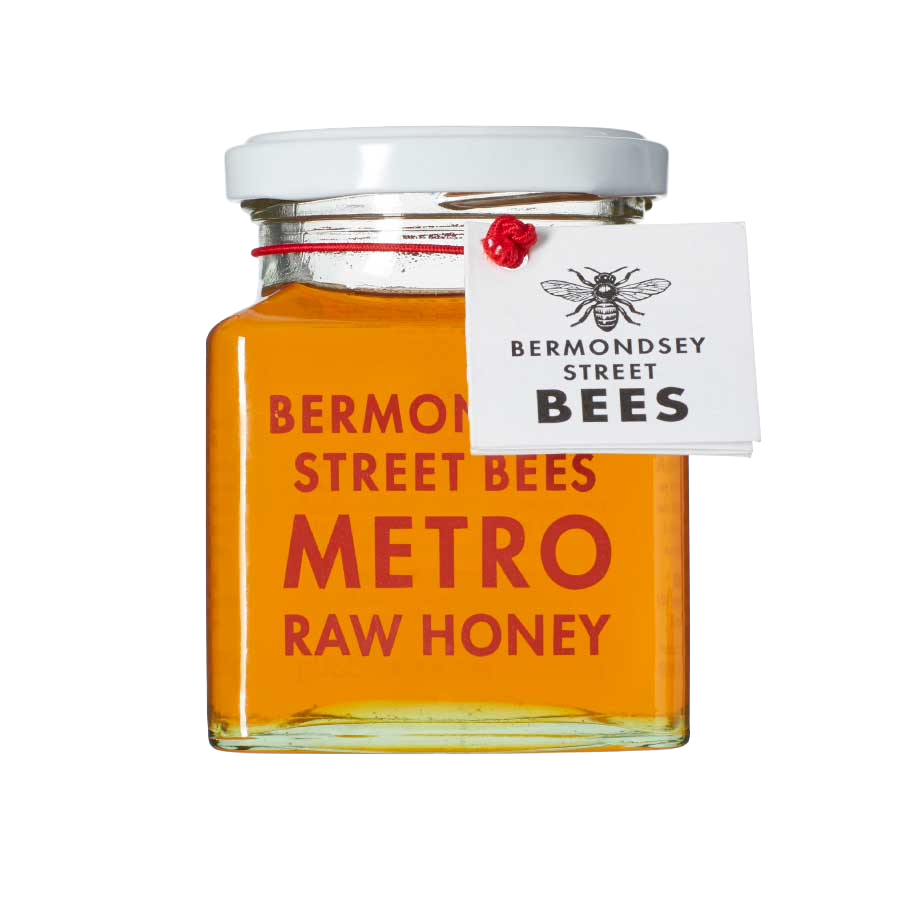 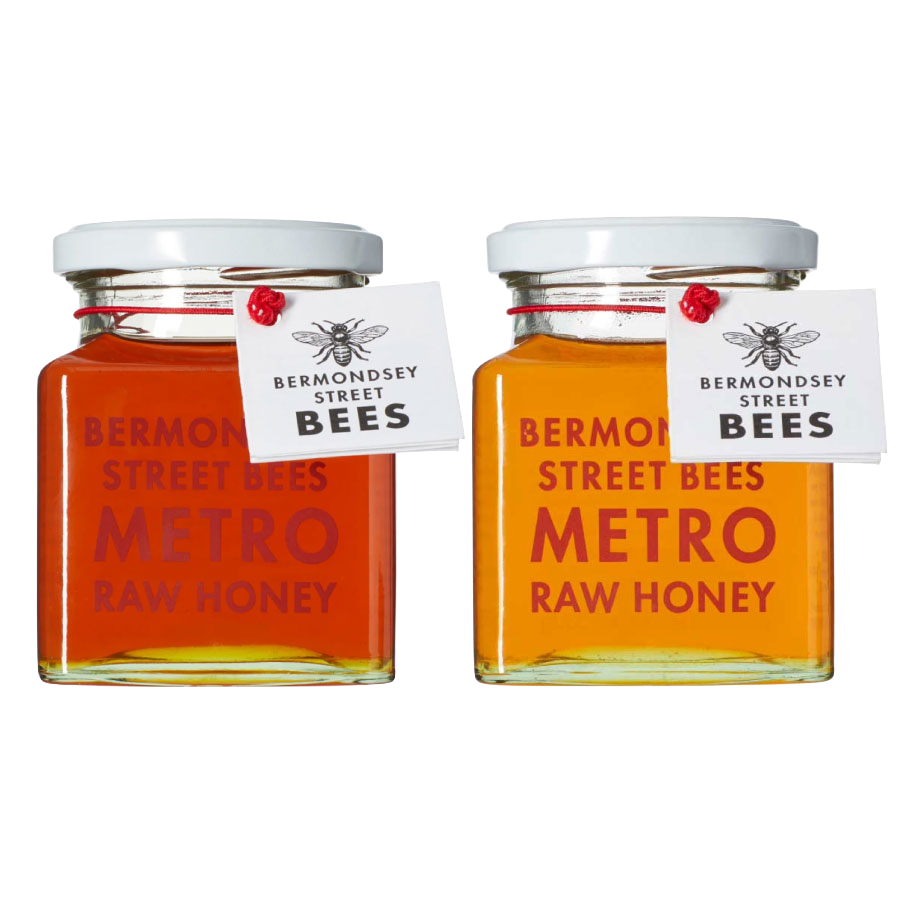 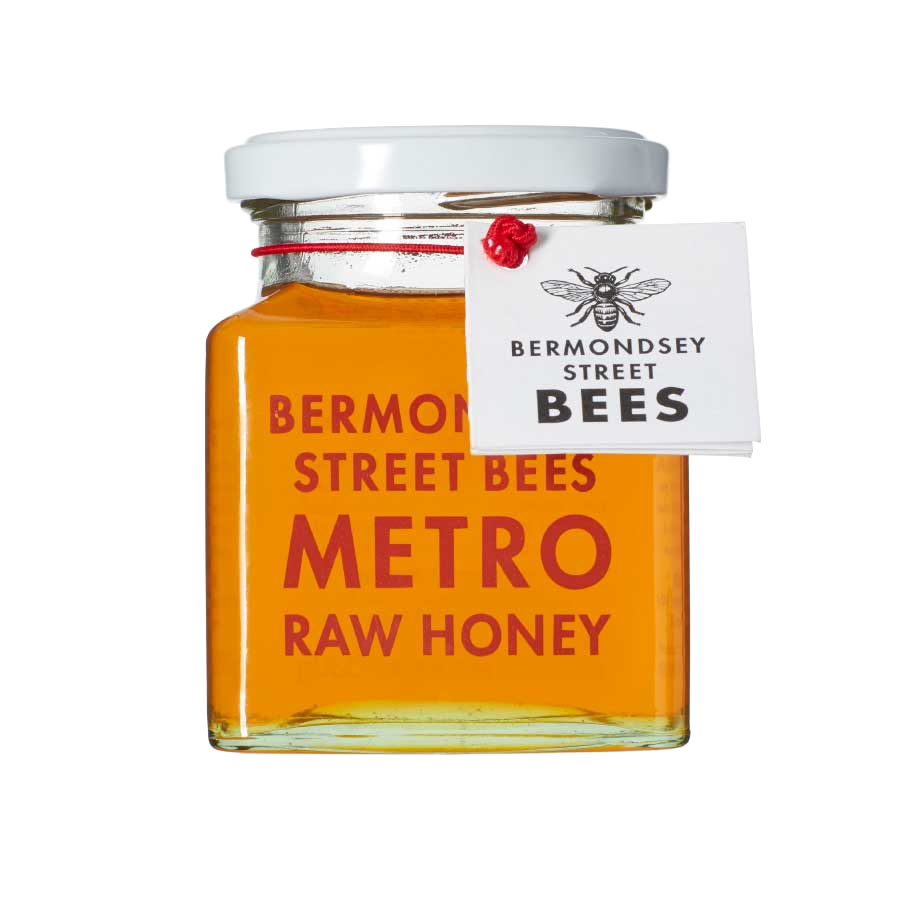 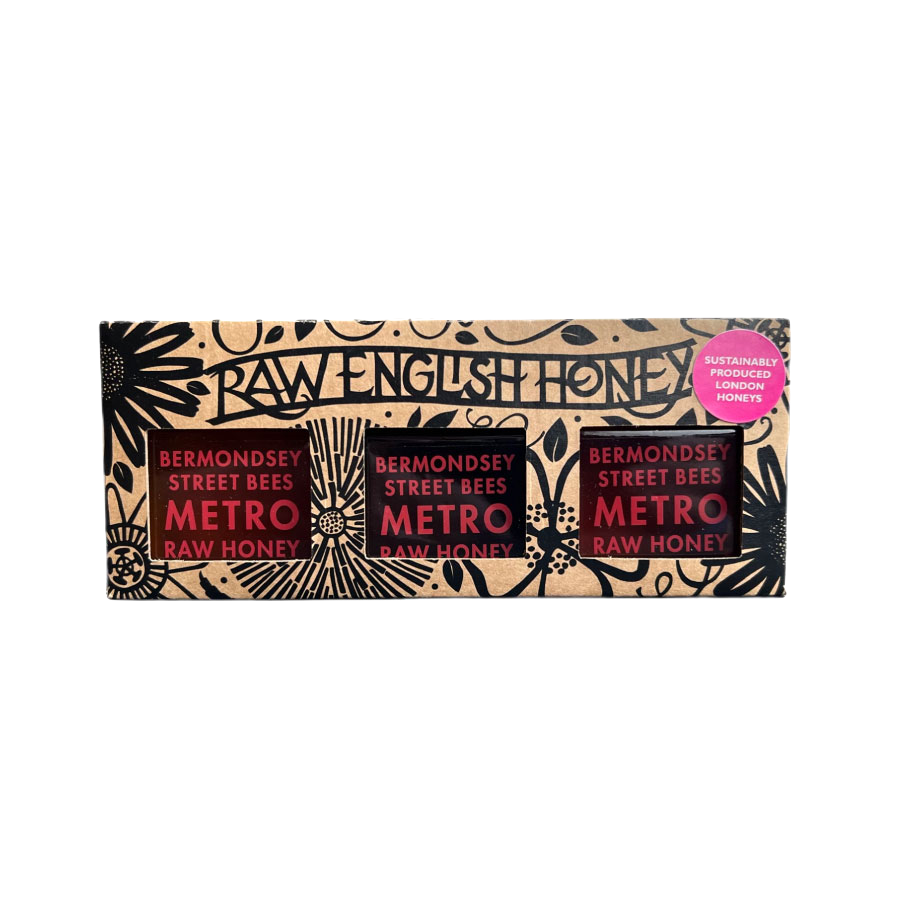 Bermondsey Street Bees is a sustainable beekeeping practice founded by Dale Gibson and Sarah Wyndham Lewis. They offer a variety of award-winning artisanal raw honeys, each with immense depth of character with fabulous stories told through their flavours, just like a fine wines or olive oils. Their raw honey is a perfect whole food, containing many natural nutrients and is produced using only artisanal production methods, hand extraction and cold filtering, to preserve the flavours and nutrient value of the final product. Every honey varietal has its own unique terroir, and a distinct individuality and seasonality to be explored and celebrated

The traditional beekeeping they practise always places the welfare of the bees first. They have their own apiaries both inside and outside London, and work with organisations who support their pioneering ‘Green Offset’ policy. Dale and Sarah have developed a very strong sustainability agenda and commitment to net biodiversity gain, especially in urban settings. The Green Offset policy helps with their advocacy and education work with businesses, government and charities to keep honeybees in cities without negatively impacting wild pollinators. You can read more about sustainable urban beekeeping and habitat management in our Provenance Story The Buzz Around Sustainability’ here.

Bermondsey Street Bees was founded in 2007,  a time when London’s open spaces, rooftops and private gardens still offered honeybees a safe haven. Even then, with sustainability top of their agenda, founders Dale & Sarah began establishing significant urban planting projects to protect and build biodiversity around their apiary sites.

Since then though, the fashionable trend for urban beekeeping has swamped London and many other cities with more and more hives. The combination of soaring honeybee populations and ever-shrinking green space raises major ecological concerns, with scientists spotlighting London beekeeping (and honey production) as having become problematic. The city’s hive density is now three times higher than anywhere in Europe, and in this challenged environment, food-seeking honeybees increasingly compete not only with each other,  but also with already-endangered wild bee species (bumblebees and solitaries.)

In the face of a steady increase in honeybee populations and parallel declines of wild pollinators, Bermondsey Street Bees have reduced their urban hive numbers significantly over the past few years. They have also moved apiaries away from urban hotspots into uncrowded, naturally rewilded land in London’s far Docklands, under an exclusive licence with The Royal Docks.

In these naturally rewilded brownfield sites,  a rich, vibrant and ever-evolving flora and fauna underpin a strong ecosystem. Here, with plentiful resources, Bermondsey Street Bees’ hives can live in balance with their wild cousins.

For that reason, you won’t find Bermondsey Street Bees’ products on supermarket shelves, or chains of any sort. Most of their honey is bought directly from them by top chefs, but a limited amount is put into jars and sold through specialist independents or online at Provenance Hub.

The word ‘pure’ is not a legal or helpful descriptor of honey, because it is unprovable… unless you are going to put every jar through a battery of tests. But unscrupulous honey producers often use it – very cynically – as a marketing term to attract hits from web searches.

They do it because ‘pure’ is a word that consumers so often use when they are looking for real honey, straight from the hives. And it’s not surprising that it’s such a popular search term, because clued-up people know that honey can easily be bulked out with other sugars at some point in its production.

The sad fact is that so much of the honey for sale online or in shops is adulterated…. often not just with sugar syrups but with other cheap honeys. In other words, what’s in the jar is a blended mix of nameless, untraceable products from all over the world. read more

Firstly, turn the jar round and look at the label. If it says the words ‘blend’ or ‘blended’ on it, put it straight down. You have no means of knowing how many honeys, from what sources, have been mixed together in that product. And blending is not done by beekeepers, it’s done by food scientists in factories, using aggressive processing techniques including pasteurising and micro-filtration. These compromise the natural flavours and the food value of honey.

Labels will sometimes tell you that the honey is ‘single-source’. This is good information because it means that the honey comes from just one place and will be true to its terroir.

The word ‘raw’ is another slightly contentious word, but can be a much better clue in the hunt for real honey… What ‘raw’ actually means that the honey has never been heated above the natural hive temperature. This low-impact approach to production keeps honey at its natural best, especially when allied with minimal filtration; removing excess beeswax but keeping the protein-packed pollens intact in the honey. (Whilst not part of the same process, it’s not unreasonable to assume that a honey described as raw is also minimally filtered.)

‘’Raw” is the word that beekeepers themselves use to explain that they still produce real honey in the traditional way, giving their product the enormous care and respect that it deserves. The difference shows both in the depth and complexity of the flavour and in the fact that the honey’s nutritional value has been preserved as a ‘whole food’ not broken apart and re-assembled. Real honey, straight from the hives, is one of nature’s greatest gifts.

If this all just seems like too much effort, there’s a simple solution. Buy single-source honey either direct from local beekeepers or from retailers who you know have done the authentication work for you and chosen excellent producers of real honey.

We use cookies on our website to give you the most relevant experience by remembering your preferences and repeat visits. By clicking “Accept All”, you consent to the use of ALL the cookies. However, you may visit "Cookie Settings" to provide a controlled consent.
Cookie SettingsAccept All
Manage consent

This website uses cookies to improve your experience while you navigate through the website. Out of these, the cookies that are categorized as necessary are stored on your browser as they are essential for the working of basic functionalities of the website. We also use third-party cookies that help us analyze and understand how you use this website. These cookies will be stored in your browser only with your consent. You also have the option to opt-out of these cookies. But opting out of some of these cookies may affect your browsing experience.
Necessary Always Enabled
Necessary cookies are absolutely essential for the website to function properly. These cookies ensure basic functionalities and security features of the website, anonymously.
Functional
Functional cookies help to perform certain functionalities like sharing the content of the website on social media platforms, collect feedbacks, and other third-party features.
Performance
Performance cookies are used to understand and analyze the key performance indexes of the website which helps in delivering a better user experience for the visitors.
Analytics
Analytical cookies are used to understand how visitors interact with the website. These cookies help provide information on metrics the number of visitors, bounce rate, traffic source, etc.
Advertisement
Advertisement cookies are used to provide visitors with relevant ads and marketing campaigns. These cookies track visitors across websites and collect information to provide customized ads.
Others
Other uncategorized cookies are those that are being analyzed and have not been classified into a category as yet.
SAVE & ACCEPT